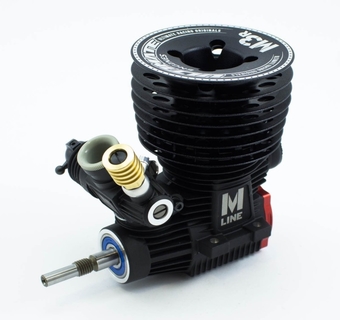 This is the 3 port .21 Off-Road Ultimate M3R Competition Engine. After launching the M3S engine back in September 2017, Ultimate Racing presents its last creation, the M3R.

Like the M3S, it’s a 3 transfers OS based engine, with the same configuration and power than its predecessor.

Unlike the M3S, the M3R incorporate the following parts:

The M3R, like the M3S, is a long stroke, high torque and extreme power engine with low fuel consumption. Produced with the guaranteed OS quality, the M3R is a cheaper option with the same power and performance.

The cooling head has been redesigned by Modelix. It’s not as low as the B2102 lower profile but it’s lighter so it keeps the center of gravity as low as the B2102 but improving its performance on very high temperatures. It’s the same head as the M3T and M3S engines.

The Ultimate M3R engine comes with the same carburetor than the M3S and M3T engines where high speed needle holder has been redesigned for a better refrigeration of the fuel flow into the carburetor, lowering the temp of the carb, and as a consequence it’s more stable with a great idle stability, improves fuel mileage and overall engine performace.

Besides this, the uniball joint of the carb slide has also been modified with two stoppers instead of one. With this new modified design, you can easier adjust the angle of the uniball joint without having to disassemble the engine.

The backplate is CNC machined and made of 7075-T6 Swiss Aluminum. The reason of making it with this material is to make it harder than the original and reduce the conrod-backplate friction increasing the life of the conrod and improving engine efficiency and performance.

The M3R crankshaft has been designed by the O.S team of engineers to ensure an optimum flow of fuel thanks to the aerodynamic design and the silicone filling. It is balanced with a tungsten weight in order to increase the inertia to rotation.

In line with the high quality and performance of this engine, its two high precision made in Japan bearings ensure high idle stability, longer life and low friction at high temperatures.

The engine is supplied with a 6.5mm plastic venturi.

The sleeve with 3 inlet port and an exhaust port guarantee a low fuel consumption with a very high but smooth and linear power.

Both, the sleeve and piston are made from a high strength aluminium bar to improve its durability.