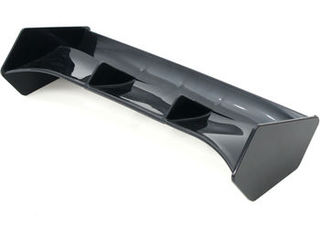 or four interest-free payments of $5.58 with

THE JQRacing Black Wing is arguably the sexiest wing on the market. Just look at it! We didn’t pre-drill holes in it so that anyone can add some style to their cars. As for the JQ Cars, we made small indents in the grid pattern on the bottom so it is easy to fit. This wing is made for all 1:8th Buggies, any brand! I remember designing the wing. It was the very last part that was confirmed for production. I wanted to get it just right. We went through many different versions, and I remember getting extremely angry at my design software also, when I was attempting to create various shapes. We offer the wing in White, Yellow and Green, and we have also released optional CNC high wingmounts, (JQB0000 (Black) JQB0000 (Gold)), these raise the wing up higher, increasing stability specially at high speeds and while jumping. Definitely worth getting!